Size doesn’t matter when it comes to US stocks, because investors seem to prefer small companies over big ones in 2018.

That’s a sign of the continued strength of America’s economy as small-caps tend to move earlier than later stocks whether up or down.

The Russell 2000, an index that includes shares of mostly smaller US companies, is up nearly 7% this year and is trading at an all-time high this week.

The Dow and S&P 500, both of which are home for industry giants like Apple, Disney, Coca-Cola and Boeing are up just 1% and 2% respectively. They are both still trading about 5% below their record highs.

To start, many smaller businesses in the Russell 2000 are growing their profits at a faster rate than the giants of the Dow and S&P 500.

We see this continuing throughout the rest of 2018. Investors would be wise to consider smaller stocks as they tend to move higher faster when things are going well and lead the overall markets.

The Dow Jones industrial average fell more than 100 points shortly after the opening bell, as large industrial components like Boeing and Caterpillar weighed down the other blue-chip stocks.

The S&P 500 fell about 0.4 percent in early trading as a decline in interest rates pulled financial and banking stocks down; shares of J.P. Morgan fell 0.8 percent while Bank of America lost about 1 percent.

The Labor Department reported that the economy added 164,000 jobs in the month of April, lower than the 195,000 expected by economists polled by Reuters. Average hourly earnings growth also missed, rising only 0.15 percent against expectations of a 0.2 percent gain.

Despite the miss in the number of jobs added, the government said the unemployment rate fell to 3.9 percent, an 18-year low.

Despite a broader slip in equities, Apple jumped after longtime investor Warren Buffett revealed that he bought 75 million shares during the first quarter, which added to the conglomerate’s already massive stake in the tech giant, “brought down our cash position moderately.”

The early moves in U.S. stocks came as markets across the globe showed a mixed picture. On Thursday, U.S. stocks finished relatively mixed, after the Dow Jones industrial average erased a nearly 400-point loss during the session, on the back of strong earnings.

Record exports reduced the U.S. trade deficit in March, the first drop in seven months in a massive gap that President Trump has been determined to shrink with an aggressive America first policy.

The Commerce Department says the trade deficit slid to $49 billion, down from $57.7 billion in February and lowest since last September.

The President has vowed to bring down America’s massive deficits, which he blames on bad trade agreements and abusive practices by U.S. trading partners.

Exports rose in March to a record $208.5 billion, led by shipments of civilian aircraft and soybeans. Imports slipped 1.8 percent to $257.5 billion.

Tesla did report better-than-expected quarterly results Wednesday after the close. However, the stock fell after CEO Elon Musk dismissed questions from analysts regarding gross margins and Model 3 production and gross margins.

Treasury Secretary Steven Mnuchin is leading a group of Trump administration officials to meet with Chinese Vice Premier Liu He and discuss trade between the two nations.

Shortly before the talks were set to take place in Beijing, the mood between the world’s two largest economies worsened amid reports the U.S. administration is considering taking executive action to restrict some Chinese firms’ ability to sell telecoms equipment.

Crude futures briefly spiked before trading 0.8 percent lower at $67.39 per barrel. Gold futures jumped 0.7 percent to $1,314.10 per ounce. The precious metal is often seen as a safe-haven trade. 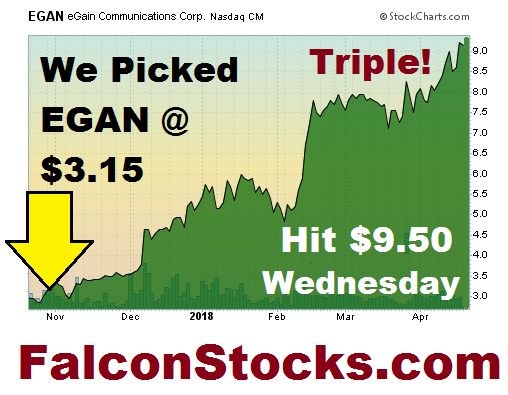 After a hectic week that saw Amazon (AMZN), Facebook (FB), and Alphabet (GOOGL) all report earnings, the week ahead will continue the abundance of headline earnings reports and blockbuster economic data.

The busy week of earnings will be punctuated by results from Apple (AAPL) after the market close on Tuesday.

And the economics calendar will bring us the monthly jobs report, which should show the U.S. economy continues to create jobs in the 10th year of the economic recovery. Economists expect the economy added 185,000 jobs in April, a rebound from March’s disappointing headline jobs gain while the unemployment rate is expected to drop to 4% after it held at 4.1% for a sixth-straight month in March.

The Federal Reserve will also announce its latest monetary policy decision on Wednesday, though this announcement should come and go without fanfare as the central bank is widely expected to keep its benchmark interest rate policy unchanged in a range of 1.5%-1.75%.

These reports follows last week’s first estimate on first quarter GDP, which showed the economy grew at an annualized pace of 2.3% in the first three months of the year, better than had been expected by economists but a deceleration from the economic growth seen at the end of last year.