WEDNESDAY – U.S. stock indexes barely moved on Wednesday as shares of FedEx fell while investors awaited a policy decision by the Federal Reserve.

Bloomberg News reported some U.S. officials are worried China could walk back on some concessions. However, The Wall Street Journal said U.S. Trade Representative Robert Lighthizer and Treasury Secretary Steven Mnuchin both plan to travel to Beijing next week for another round of negotiations with Chinese Vice Premier Liu He. These reports buffeted stocks on Tuesday.

The world’s two largest economies have imposed tariffs on billions of dollars’ worth of one another’s goods over the past year, battering financial markets and souring business and consumer sentiment.

No economic data are expected on Wednesday, however, on the earnings front, General Mills is set to report its results before the bell and Williams-Sonoma will report after the bell.

Don’t forget to check out the web’s top penny stock picks, with the latest stock pick being published just yesterday.

You’ve most likely heard about penny stocks from advertisements you’ve read on the Internet or from emails you’ve received. If you’ve got some extra money that you’d like to put into the market to generate big returns, you may want to consider small-cap and micro-cap stocks. These stocks can be very risky, though, so you have to know how to trade them well.

Our September 23 penny stock pick, PLNR finally hit that double it was coming so close to. 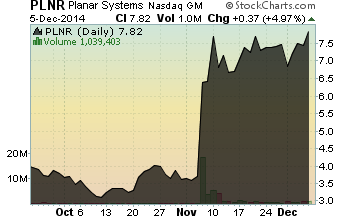 Congrats to our readers that decided our PLNR pick was for them and thanks to all those that complimented us on our research report on the stock.

100% Unbiased, Guaranteed. We do not own shares and are never compensated in any way to pick our stocks. We have no vested interest in the stocks we pick… only to make our readers happy.