The Dow Jones Industrial Average climbed 138.93 points to 25,848.87 as Boeing shares turned around to close 1.5 percent higher. Boeing’s turnaround was sparked by a report saying the company planned to roll out a software upgrade for its 737 Max aircraft. The stock had been under pressure all week after an Ethiopian Airlines flight using a 737 Max plane crashed on Sunday, which prompted several countries to ground flights involving the plane.

The S&P 500 and Nasdaq Composite both rose at least 2.9 percent, though the laggard Dow gained only 1.7 percent amid Boeing’s troubles. The S&P 500 also posted its biggest one-week gain since November.

Stocks have been on a tear this year, with the three major indexes rising more than 10 percent each in 2019.

This week’s gains were largely led by tech shares, as the sector surged 4.9 percent. The tech sector also became the best-performer of 2019. Nvidia was the best-performing stock in the sector, rising more than 12 percent while fellow semiconductor stocks like Broadcom and Lam Research also rose sharply this week.

If you are in need of the best penny stocks of any other online newsletter, check out FalconStocks.com. Online since 2004, 100% Unbiased, family-run and they have 20+ years of stock market / NYSE trading experience!

Our newest penny stock pick has been posted for today, June 26, 2018. Come visit and read about our newest idea!

WEDNESDAY – Stocks rose on Wednesday, boosted by dealmaking activity and potentially improving trade relations between the U.S. and the European Union.

The Dow Jones industrial average, meanwhile, rose 10 points as it tired to snap its longest losing streak since March 2017.

Disney raised its bid for Twenty-First Century Fox assets to $38 per share, or $71.3 billion, surpassing an offer made by rival and NBCUniversal parent Comcast. Last week, Comcast bid $65 billion in cash for Fox assets which include FX, Star TV and stakes in Sky.

Stocks fell on Tuesday as trade tensions between the U.S. and China intensified. The Dow led the way lower, sliding nearly 300 points and erasing its gains for 2018.

Size doesn’t matter when it comes to US stocks, because investors seem to prefer small companies over big ones in 2018.

That’s a sign of the continued strength of America’s economy as small-caps tend to move earlier than later stocks whether up or down.

The Russell 2000, an index that includes shares of mostly smaller US companies, is up nearly 7% this year and is trading at an all-time high this week.

The Dow and S&P 500, both of which are home for industry giants like Apple, Disney, Coca-Cola and Boeing are up just 1% and 2% respectively. They are both still trading about 5% below their record highs.

To start, many smaller businesses in the Russell 2000 are growing their profits at a faster rate than the giants of the Dow and S&P 500.

We see this continuing throughout the rest of 2018. Investors would be wise to consider smaller stocks as they tend to move higher faster when things are going well and lead the overall markets.

U.S. stocks traded mixed on Tuesday as one of the busiest days of the earnings season got under way.

The Dow Jones industrial average traded slightly lower, with Procter & Gamble contributing the most gains to the tune of 20 points, but Home Depot shaved off approximately 20 points. The S&P 500 fell 0.1 percent, with consumer discretionary leading decliners. The Nasdaq composite held around breakeven.

More than 90 companies were scheduled to post quarterly results on Tuesday. Dow components 3M, Caterpillar and DuPont reported earnings before the bell. Caterpillar and 3M posted mixed results, as both beat estimates on the bottom line, while missing on revenues. Caterpillar also lowered its 2016 earnings per share guidance.

WEDNESDAY – U.S. stocks traded in narrow range Wednesday after morning data and ahead of the scheduled afternoon conclusion of the Fed meeting.

Treasury yields climbed, with the 2-year topping 1 percent for its highest since Jan. 8, after inflation and housing data.

The FOMC is due to conclude its two-day meeting on Wednesday with the 2 p.m. ET release of its statement and economic projections. Those include the highly scrutinized “dot plot,” which shows the targets for appropriate federal funds rates by FOMC participants. Fed Chair Janet Yellen is also scheduled to give a news conference at 2:30 p.m.

Oil traded higher, with WTI above $37 a barrel following news producers will meet next month in Qatar to discuss a proposal to freeze output.

Here’s a thing I like about small companies. In many cases, the people who run them aren’t just executives — they’re proprietors who took massive risks to build what exists today and who run themselves ragged to make sure that what does exist will be even better in the future. While I’ve met hundreds of extremely competent, dedicated executives over the years, there’s just something different about the person who scratch-built a company. To him or her, there is no such thing as a better employment offer around the bend. There’s no such thing as down time, or weekends, or even hobbies. This company is it. There’s no pushing ideas through some big committee. That person is the committee.

Maybe those kinds of companies sound a little risky to you. After all, doesn’t classic finance hold that, all else being equal, the smaller a company is, the riskier it is? Well, yes, on a company-by-company basis, those with smaller market capitalizations are riskier in terms of volatility and potential for total loss.

I believe, all else being equal, that this is insane in the aggregate. There is no reason that a portfolio of well-researched, quality small-cap companies should be riskier than one consisting of large-cap companies.

At least 99% of free penny stock picks websites are making money off of you, hand over fist. They make many times what legitimate penny stock websites like ours can ever do. At the same time, they lie, publish misinformation and pretend to have researched the penny stocks they pick.

They Are Paid To Pick That Stock!

The truth is one of two things (and you can verify this every time):

1) Someone paid them to promote the stock, so they could SELL when telling you to buy!

2) The website owns shares and are selling, profiting off the rise in price! You are buying THEIR shares!

-They are not producing real research, they are paid to “pump” the stock.

-They are paid in either cash or in shares of stock, or both.

-While telling you to buy now, they are selling everything they can and cashing in.

-If paid in cash, a large shareholder (possibly an executive) is selling and cashing out.

-Their “Disclaimer” (usually hidden) will reveal how much they were paid.

Why does this happen?

Simply put, many penny stocks do not trade much volume. Because of that, any increase in buying will push the price higher and allow sellers to cash out – at higher prices. It is worth it for the CEO or other large shareholder to pay a website $10,000 to pump their stock if it means they can sell hundreds of thousands of shares at much higher prices!

We see it time and time again. As long as the promoting website or newsletter discloses they are being paid, it’s technically legal. But they are skilled at hiding that and relying on the fact that most people will believe them without checking.

The newest scam has these same penny pumpers telling you they are watching the same promoters and you can profit off of the move when a promotion starts. They pretend to be traders, with a free site or penny stock newsletter, of course. They’re there to help you make money off of those darn pumpers! The fact is, they are the penny pick pumpers. It’s just another lie to get you to believe they’re working for you. Of course they are, your money!

A great example of a “pump and dump” scam is one we told our readers about in December and January. North Springs Resources (NSRS) was a classic.

Just before the start of the penny stock pump, the President, Harry Lappa filed for numerous stock splits so that he now owned a total of 500 million shares of NSRS.

The company then filed an 8-K stating they were working on a deal to acquire mineral rights to a property purported to have gold deposits. The only claim made at all was that the property was part of the “prestigious Mineral Ridge Mining District, Esmeralda County, Nevada”. That means nothing. It could be a parking lot and still be part of that district.

The company hired Carrillo Huettel, LLP as corporate counsel. The same firm that was ordered by a Federal judge to hand over its bank records as it was being accused of stock fraud. Good company, no?

AwesomePennyStocks.com was paid to promote the penny stock and did so through its affiliates effectively – as usual, by PRETENDING to look like they do penny stock pick research, and HIDING the fact they were being paid. Hundreds of emails and notices sent out to investors over and over. Of course, they never mentioned any of the news about the President, or the Corporate Counsel, none of that, just how exciting the land acquisition was! Of course, the company never intended to actually buy the land, just issue press releases that it “intended” to. If you believe that they really intended to, I have some lovely Florida swampland – no, make that “lake-front property” to sell you.

Now, the biggest scam of all that day was this: Fake bids being placed to buy shares of stock. Take a look at the Level II screen showing the massive bids of over 2.5 million shares showing. 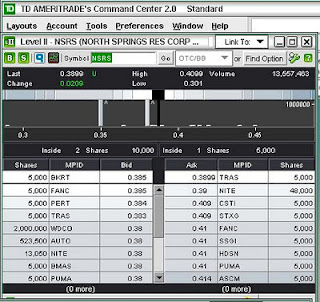 Those are there to keep the sellers thinking it might be going higher so they stay back while the President sells all he can. Those huge bids always stay below other bids so they are never actually buying shares. It’s all a show, a scam.

After more than a decade working on trading floors, I can tell you one fact: Market-Makers WOULD NEVER show 2,000,000 shares to buy even if they had an order. Never! Showing your large order would cause the price to rise, making you and your client have to pay higher prices. That is NEVER done. What we have here is fake bids being placed hoping to push the stock higher. Why? Because they are actually selling.

Here is a chart of the penny stock pick pump scheme. As you can see, when the emails and touting ended, the stock fell off the cliff. Guess who still owned shares when that happened? Guess who had already sold all of theirs?

There are very few penny stock pick websites our these like ours that are not paid to promote. We provide pure, honest research in small companies. If you decide to join a penny stock newsletter or penny stock website, please read their disclaimer first! Find out if the are paid or can be paid, and find out if they own or can own shares of the stock. If so, STAY AWAY! Many say they are not paid – but they own shares – that is the SAME as being paid!

Our only financial interest is in keeping our subscribers happy so they come back again and again. Doing it the honest way, our way, means making much less money. But we can sleep at night.