MONDAY – Stocks were steady Monday morning as a week filled with key economic reports kicked off, and investors continue to keep a close eye on the Fed’s planned interest rate hikes.

Parts of The Treasury yield curve inverted on Monday, raising some recession concerns. Earlier on Monday, the yield on the 5-year Treasury note rose to 2.6361%, while the 30-year yield was down less than 1 basis point to 2.6004%.

However, the main yield spread that traders watch — the spread between the 2-year and the 10-year rate — remained positive for now.

The Dow and S&P 500 rose on Friday to close out their second consecutive winning week. The Dow gained 153 points, or 0.4%. The S&P 500 advanced 0.5% and has more than erased its losses since Russia invaded Ukraine in late February. Meanwhile, the Nasdaq Composite dipped 0.2% but still finished the week in the green.

The moves came as investors continue to monitor developments in Russia’s war on Ukraine and expectations about the Fed’s plans to hike interest rates.

Investors are looking forward to the Job Openings and Labor Turnover Survey, or JOLTS, this week. The JOLTS report is one set of employment data that the Federal Reserve is watching closely as it tightens monetary policy.

U.S. stocks traded mixed on Tuesday as one of the busiest days of the earnings season got under way.

The Dow Jones industrial average traded slightly lower, with Procter & Gamble contributing the most gains to the tune of 20 points, but Home Depot shaved off approximately 20 points. The S&P 500 fell 0.1 percent, with consumer discretionary leading decliners. The Nasdaq composite held around breakeven.

More than 90 companies were scheduled to post quarterly results on Tuesday. Dow components 3M, Caterpillar and DuPont reported earnings before the bell. Caterpillar and 3M posted mixed results, as both beat estimates on the bottom line, while missing on revenues. Caterpillar also lowered its 2016 earnings per share guidance. 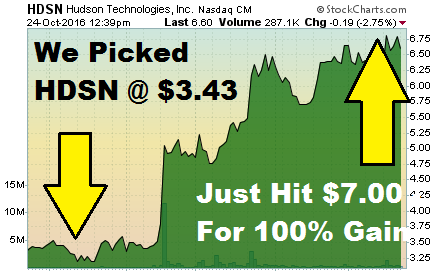 The Dow Jones industrial average fell about 100 points in midmorning trade before holding about 50 points lower, with UnitedHealth contributing the most losses. The S&P 500 fell 0.25 percent, with real estate and utilities leading decliners, as both fell 1 percent. The Nasdaq composite slid approximately 0.1 percent.

In economic news, the September Markit Manufacturing PMI came in at 51.5, a three-month low. “U.S. manufacturers signalled another moderate upturn in both production volumes and incoming new work during September, but the latest survey indicated a further loss of growth momentum from July’s recent peak,” Markit said.

The ISM Manufacturing index for September came in at 51.5, up from 49.4 in the previous month. Construction spending fell 0.7 percent in August, with analysts expecting a 0.2 percent increase.

TUESDAY – U.S. stock index futures pointed to a slightly higher open on Tuesday, as investors remained watchful over the recovery in U.S. crude, ahead of important economic data.

For the U.S.’ first trading day of the week after Labor Day, oil is expected to keep investors abuzz after leading oil producers Russia and Saudi Arabia agreed on Monday to cooperate on stabilizing the energy market.

On the data front, the final Markit services PMI is due out at 9.45 a.m. ET, followed by the ISM non-manufacturing data, set to come out at 10 a.m. ET.

The data will be of key importance for the U.S., as investors look for indications as to how well the U.S. economy is performing. The data come just days after a disappointing jobs figure for the U.S. In August, nonfarm payrolls increased by 151,000, below what Wall Street economists were expecting of 180,000.

When it comes to earnings, Marvell Technology posted quarterly results before the bell Tuesday. Dave & Buster’s Entertainment and Casey’s General Stores are also expected to release their latest earnings.

The Dow Jones industrial average rose just 10 points, with Home Depot contributing the most losses. The S&P 500 rose about 0.15 percent, with materials leading. Investors also kept an eye on health care a day after posting its worst day since June 24.

The three major indexes have held in a tight range recently amid low trading volume and a lack of volatility. On Wednesday, the S&P recorded its 33rd straight session without a 1 percent move on a closing basis.

MONDAY – U.S. stocks tried for gains on Monday as investors digested falling oil prices, low trading volume and looked ahead to a key speech from the top Federal Reserve official.

Stocks posted new record highs last week, despite the S&P notching its 30th straight session without a 1 percent move on a closing basis, its longest streak since 2014.

Fed Chair Janet Yellen is scheduled to deliver a speech Friday on the U.S. economy and monetary policy at the Economic Policy Symposium at Jackson Hole, Wyoming.

There are no major economic data reports due Monday, but the second read on second-quarter GDP is scheduled for release Friday.

Chevron, Exxon Mobil and UnitedHealth contributed the most to declines in the Dow Jones industrial average, which held about 100 points lower in afternoon trade. The Dow is up about 3 percent for the month so far.

No major economic data was due Monday. The Dallas Fed manufacturing index improved from June’s negative 18.3 to minus 1.3 in July. Second-quarter GDP and housing data are among the major reports due later in the week.

About nine stocks declined for every five advancers on the New York Stock Exchange, with an exchange volume of 423 million and a composite volume of 2.0 billion in afternoon trade.

On the earnings front, PepsiCo reported better-than-expected earnings. Barracuda Networks and Helen of Troy are among companies set to report after the bell.

The Dow Jones industrial average fell more than 100 points soon after the open, with Goldman Sachs contributing the most to declines.

Among the few advancers were Pfizer and Apple, which attempted to break its first eight-day losing streak since 1998.

The euro traded near highs not seen since last August, while the yen was around its strongest against the dollar since October 2014. The dollar index hovered near 15-month lows after falling half a percent Monday for its sixth-straight day of decline.

The Dow Jones industrial average gained more than 100 points soon after the open. Goldman Sachs and JPMorgan Chase contributed the most to gains.

Financials are the worst performing sector in the S&P 500 for the year so far.